The Best Parks of the Urban World

Life in the city is great. You have everything you need on your doorstep, the atmosphere is buzzing, cuisine from all over the world flies in thick and fast, there’s always somewhere new to try and transport is a convenience that you can always rely on. Yet, in some cities, there’s something missing; green spaces. We believe that green spaces form a fundamental part of city life, giving people spaces to meet, enjoy and relish the fresh air. Just because you live in a city, it doesn’t mean you should miss out. Here are five cities that threw the rulebook out the window and created green spaces in the most unlikely of places. 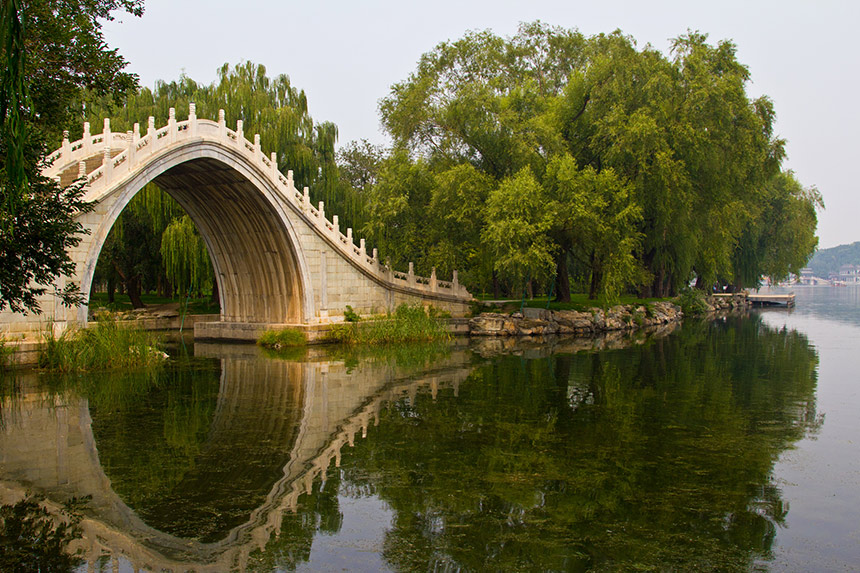 From 50-lane-wide traffic jams, to the continuous honking of horns from scooters, cars and bikes weaving in and out of traffic, it’s fair to say that Beijing isn’t the calmest of cities. Don’t worry, there is an escape on hand to alleviate the smog-induced headache. A rural refuge in the form of China’s largest Royal Park lies in wait on the outskirts of the city. It consumes an expanse of 2.9 sq. km, three quarters of which is covered in water and is everything a great park should be. Its origin dates back as far as 1153 when Prince Hailing demanded it be built and what might have seemed like a ludicrous demand at the time, turned out to be a great request. Centuries later, millions every year still enjoy its naturally calming landscape and its welcoming charm. The park is dominated by Longevity Hill, a 60 metre slope adorned with traditional Chinese buildings that stagger along the slope, peering out from beneath the trees. The knoll overlooks Kunming Lake, a sprawling expanse of still water that’s a firm hotspot for boat rides out to the ancient island temples. The three-tiered theatre is the ideal place to sit back and enjoy traditional Chinese performance in a beautifully restored theatre that houses the biggest and best-preserved stage in all of China. In a city that runs at great speed, Summer Palace allows you to take a step back in time and experience the traditional side of China, away from the haste of Beijing’s city centre in this stunning UNESCO World Heritage Site. 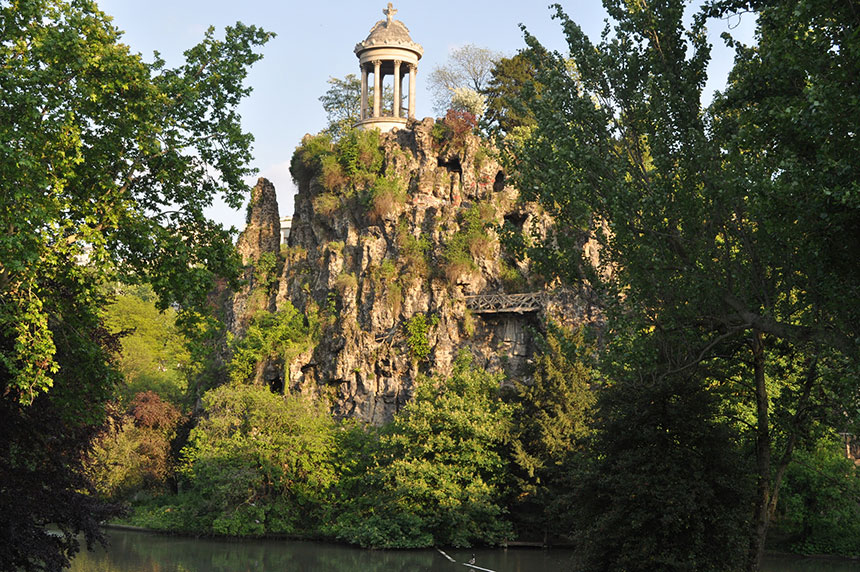 It took one thousand dedicated workers to craft this incredibly striking landscape and how it shows.  What was once the site of a handful of quarries has become a hub for those looking to stretch their legs and take in the fresh air, all in walking distance from city life. Steep cliffs and beautifully exposed rock faces all stem from the park’s days as a quarry and to the untrained eye, you’d think you were stood in an alpine riverside retreat, not a city. This is a man-made escape that works in harmony with the natural environment. The park is crowned by the elegant Temple de la Sibylle, a miniature replica of the ancient Roman Temple of Vesta, which perches 50 metres above the lake. A 63-metre-long suspension bridge hangs casually above the lake, commanding fine views of the expanse below. The pristine park gardens were created by Napoleon II’s team and were designed to showcase the species of plants, trees and shrubs growing in the park. In fact, some of the plants and trees in the park have been there since the very beginning. 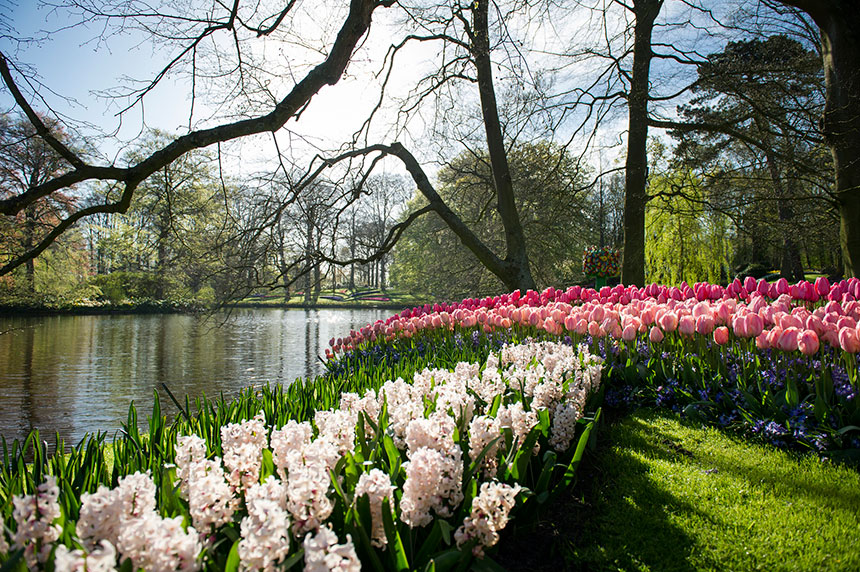 Grab the sunglasses, because this is undoubtedly the most colourful park we’ve ever seen. This spring saw more than seven million bulbs burst into in bloom, as the team at Keukenhof carefully planted 800 varieties of tulips ready for the adoring public to ogle. This year, the theme of “The Golden Age” was chosen to show off the era when Holland became wealthy through worldwide trade and who knows what next year will bring? All we know is that every year a new theme emerges and the team assemble a display of epic proportions accordingly. This is an incredible display of vibrancy and artistic flair and it’s no small order either as it stretches over 79 acres of land. Visitors can also enjoy access to the Sensory Gardens, where feelings, smells and sight work in harmony to create an all-round enjoyable experience. For those who are strolling the park hand in hand, the Romantic Garden allows visitors to craft messages and to leave their message of love there. Sensational flower shows alongside vegetable and historical gardens telling tales of cultivation in the Netherlands make this more than just your average park. This is interaction with nature at its best. 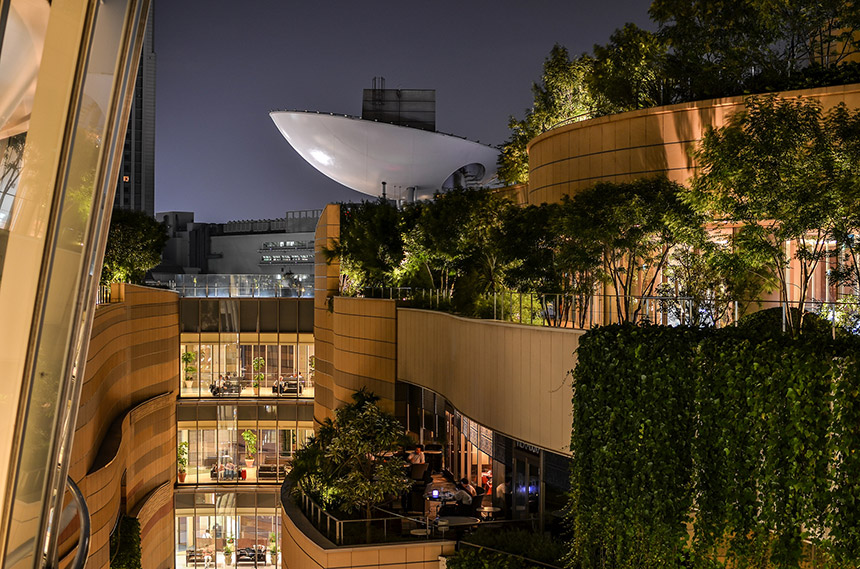 Any preconceptions of what a mall should look like, or a park for that matter, have gone out the window at Namba Parks, Japan. Osaka is a densely populated, concrete jungle, comprised of skyscraper after skyscraper soaring high into the air. It was a city in need of a break from the grey, craving an injection of colour and nature into its soul. Little space for expansion remained on the ground, so the sky-high Namba Parks were born.  The rooftop park crosses over multiple tower blocks, creating seamless connectivity. Clusters of trees, flowers, exposed rock, streams, ponds, waterfalls and well-kept grass areas are in abundance, making this a rare getaway from Osaka’s busy streets. With flashes of green in all direction, citizens can enjoy a natural and comfortable environment in which to shop until they drop. The shopping street lies at the bottom of a deep canyon which carves a path through the very centre of it all. Passers-by can easily access this natural refuge as the slopes of the park connect through to the ground level of Osaka’s streets. Not your typical park, it offers a place to enjoy nature in what is otherwise an incredibly urbanised setting. 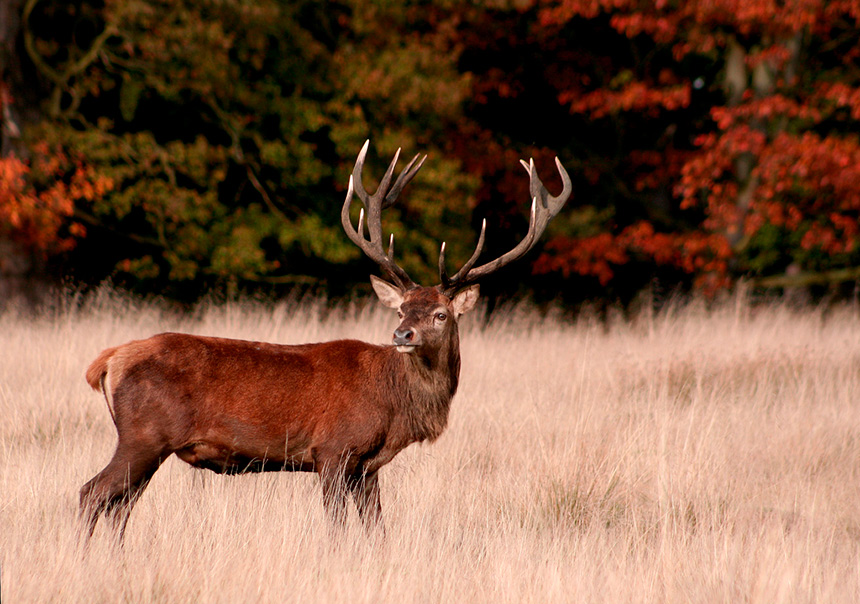 Richmond Park holds the gauntlet as London’s largest park. Whilst its competitors Hyde Park and Regents Park both boast a list of their own exceptional qualities, Richmond Park trumps them in every category. England’s capital city is steeped in history whichever nook and cranny you look in and this park is no exception. Home to King Henry’s Mound, which dates back to 1536, this is where Henry VIII once stood to watch a rocket be fired from the tower of London. These days you won’t find royalty on this steep slope, but you will be offered great panoramic views of London’s skyline, with a clear view of St. Paul’s Cathedral in the east and Thames Valley in the west. The park’s expansive land is shared with a vast assembly of wildlife and endangered vegetation that holds great historical significance. Over one thousand species of beetle scurry across the grounds daily, alongside three hundred wild red deer, 350 wild fallow deer, 144 different kinds of bird, 546 butterflies and a range of mammals that enjoy life in-hiding. This isn’t far off being a free zoo. Activities such as bike riding, horse riding and fishing are all available in the park, testament to its vast size.